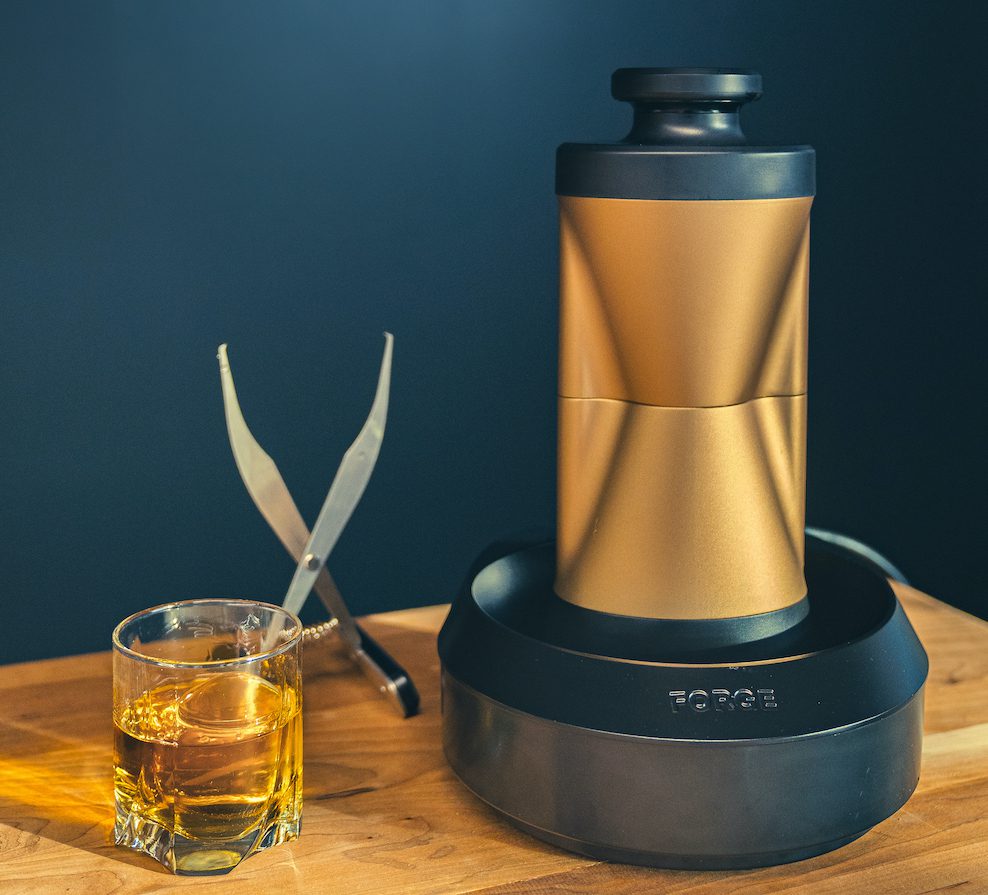 With heaters in the top and bottom, this unique heated ice press transforms a large gem of Forge Clear ice into a gorgeous sphere with virtually no pre-heat or recovery time.

What Makes the Forge Press Different:

Aside from its striking beauty, large spheres of clear ice melt slowly, allowing every flavor and aroma to come through as the beverage evolves, without the impurities and trapped air typically found in cloudy ice.

Use and Care Guide

Do NOT submerge the unit in water.

Wipe with a damp cloth if needed. Dry with a soft, lint-free cloth.

The Forge Ice Press drip tray should be drained completely after approximately every 6 ice spheres created and after each session use.

To drain the ice press:

1.  Turn off the ice press and let cool.

2.  Lift the entire ice press away from the black drip tray.

3.  Empty the water from the drip tray into a sink or drain.

4.  Reinstall the ice press onto the drip tray.

Immediately after the upper and lower halves of Forge meet, lift the top half of the press and use the tongs to remove the ice sphere.

Applying the heated press immediately to an ice gem that has been stored in a regular or deep freezer will cause the ice to crack.

Place any ice not created by or stored in the Forge Clear Ice Maker in a bowl at room temperature for five minutes before using in the heated press.

There may be a tripped breaker. Ensure Forge has not tripped the breaker.

There may be too many products plugged into the outlet. Ensure the outlet is not overloaded.

Forge may have scale on its surface from the water.

Wet a soft cloth with Forge Cleaning Solution or vinegar, and lightly dampen the surface. Let sit for a few minutes, then wipe off gently with clean water.

Do not submerge the press in water.

There may be a particle obstructing the drain holes on the upper or lower parts of the press.

Use a soft, cylindrical nylon brush to clean the drain holes.

Ensure that the rods connected to the top half of the press are clean.

Wash rods with a mild soapy water and soft cloth, and wipe clean.

Do not immerse the press in water.

Forge’s drip tray may be full.

A recurring flat spot on the top or bottom of the clear ice spheres can indicate a need to increase the size of the Ice gems produced in your Forge Clear Ice Maker. See the Ice Maker’s Use and Care guide for details.

You may have left the ice in the press too long. Use the tongs to remove the ice sphere from the Forge Clear Ice Press immediately after the upper half of the press meets the bottom.

Leaving the ice sphere in the heated press too long will cause the sphere to become misshaped.

•   Ensure each Ice gem is centered on the sphere mold before you begin to press.

•   Applying the heated press immediately to an Ice gem that has been stored in a regular or deep freezer will cause the ice to crack. Place any ice not created by and stored in the Forge Clear Ice Maker in a bowl at room temperature for five minutes before using in the heated press.

The temperatures inside Forge fluctuate as it creates, releases and stores clear ice gems.

This may cause ice gems to appear wet or to fuse together, depending on when you’re accessing the ice and where or how long the ice has been stored.

Use tongs to separate fused ice.

1.  Plug the ice press into a grounded outlet capable of providing 15A at 120VAC.

2.  Turn the ice press on using the button on the lower back of the press.

3.  Lift the upper half of the press and, using the tongs, center a Forge clear ice gem between the two halves.

4.  Place the upper half of the ice press on top of the ice. You do not have to press down on the handle while ice is being melted.

5.  Forge will press an ice sphere in about 90 seconds.

6.  Immediately after the upper and lower halves of Forge meet, lift the top half of the press and use the tongs to remove the ice sphere. Ice spheres may be served immediately or stored in a freezer for later use.

7.  Allow Ice spheres stored in a freezer to sit at room temperature for five minutes prior to adding liquid, or else they may crack.

Your new ice press may make small clicking noises during operation. This sound is created as the internal heaters cycle on and off.

Hard surfaces like the floor, walls, and countertops can amplify these sounds.

Forge’s heated press creates spheres from an ice gem in about 90 seconds.

Still have a question?

If you cannot find answer to your question in our FAQ, you can always contact us. We will answer to you shortly!

Collaborate with other people on their ideas

The Sabbath Module enables those who follow Orthodox Jewish practices to use their appliances while ...

Arden is a pitmaster-approved pellet smoker reimagined for indoor, not outdoor, use. With Arden, you...

"5S" is a framework to keep spaces tidy. We practice 5S daily here at FirstBuild—so it just made s...

A brass duct cover is the finishing touch to your brass Monogram hood. This is a custom-made product...

Co-created with the executive chef and culinary team of Churchill Downs, these carts elevated the di...

After a hackathon with the laundry team from GE Appliance Park, FirstBuild created a proof of concep...

FirstBuild created a prototype of an oven with a camera integrated into the door. This addition make...

At FirstBuild, we ran a small batch of production of Smart Hearth Ovens featuring a luxurious brass ...

Be The First to Know